It's just a card game. Really.

The girls turned us on to it.

2) Have at least one bunny alive at the end of the game.

Once all the booster packs are acquired, you have an 11.5 inch stack of cards a bunch of dice, pawns, stuff, detritus, and other stuff.

Playing the game gets spread all over a table and there's no set spot for draw, discard, dead bunnies, used weapons, money, cabbage, etc.... so. While others are devising a carrying case, (which was pretty cool) I devised a board... 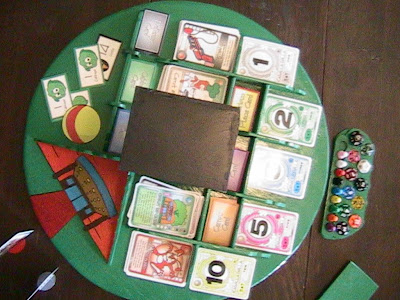 The black box in the middle is modeled after the Minilith (Bunny geeks would understand). It's about a foot tall and holds all of the cards. It's removable from the board center for easy carrying. And can lay on it's side on the board with a lid over the whole board, hat box sized.

The lid for the minilith, (pictured unpainted below), also doubles as a cribbage-style peg board on the inside for keeping track of which player killed the most bunnies. That's not really part of the game, but we're morbid that way. 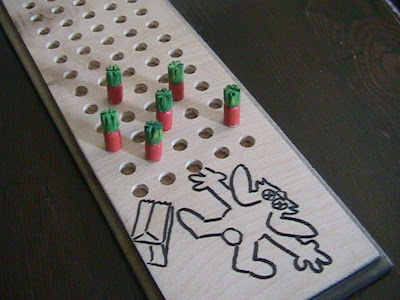 This area is fashioned after the Carrot Top Casino (Bunny Geeks would also know this joint), and it's where the dice and detritus sit until needed.

There's a spot for everything I could think of . . .the Carrot/Zodiac/Mysterious Place cards are in the chest on the bank side under the starter cards. And the toxic compost pile for used cabbage/water/defense cards is on the other side. 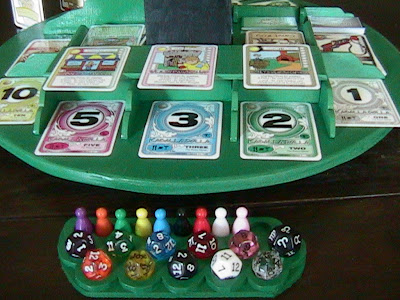 The whole thing is on a lazy susan. I have more painting to do - like scared worshipping bunnies near the minilith, zombie bunnies in the dead bunny spot, etc. - and may hand it off to the girls to paint while I'm in school.

And here it is in play, featuring a great friend of mine. 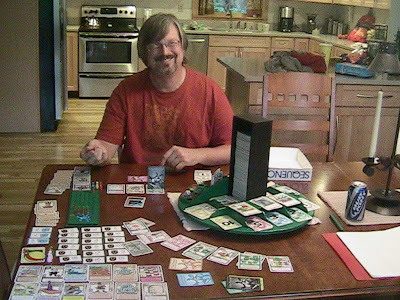 this looks amazing! Very clever indeed. How much did it cost to make?

Most of the wood was scrap pieces from my husband's workshop.

I already had the acrylic paints and glue.

I bought
the lazy susan hardware,
a can of green paint, and
the larger pieces of wood

I was forwarded your post from an avid Killer Bunnies fan. I am quite impressed! I hope it allows you and your family to play the game more and more. From Jonathan Young, Killer Bunnies Graphic Artist

If I'd known YOU were coming, I'd have put on something special.

(Or taken something off . . .)Thanks for the kind words!

Please come back and visit when I have done it up completely with more of your bunny inspirations.

I totally want one of these. If you ever decide to make another one and sell it, let me know! Like you said, once you get all the cards in the middle, it makes the game very confusing.

This is fantastic! I'd love to have one of these! If you're willing to make another, I'd buy one up real quick.

At the very least, I'd love to see updated pictures of this! With more angles so I could try and recreate it as best as possible :)

I never did truly finish the board. School became crazy and I changed careers and the sun was in my eyes annnnnnnd . . . I gave it to an avid player friend who owns all the decks.

Maybe one lazy summer day I'll get back to it.

Folks who are trying to recreate it . . .

My apologies, I have no dimensions for it, and it now lives two counties away.

If you have a deck, just lay it out. Think of all the different piles you need for the various tasks.

I think the Minilith is a foot tall and holds all the decks.

pure awesomeness! i was thinking of trying to mold one, but yours is great! i'm going to try and copy your layout.