Defending the Sanctity of Marriage.

First of all, can we just start with a track record of the sanctity of marriage?

Now that same-sex marriages have been around for a couple years, I am hoping that the large number of idiots, who live in fear that the sanctity of marriage would be somehow threatened, can rest assured that the instution remains unblemished. Well, at least there aren't any new, unique bruises to the reputation of marriage. Like a tarnished silver tea service, however shiny underneath, black is black.

The first couple to be married in Cambridge, Marcia Hams, 57, and Susan Shepherd are now facing an impending divorce just two years later.

A lesbian couple in Ontario, who separated after five days of marriage, faced problems getting what could have been Canada's first same-sex divorce because the law could be read to limit divorce to male-female couples.

So what's the problem? Why is there constantly a bill or proposal or some legal action before state and federal courts and panels that is designed to prevent, outlaw or annul same-sex marriages?

What logical argument can be made against these marriages?
Please, if you need a moment, I'll wait.

Religion? - By whose religion are we creating law?

Tradition? - Tradition is made, and is mutable. Tradition made women 2nd class and allowed the husbands to beat them. Helotry (look it up) was a tradition that reaches much further back than traditional marriage. Even today's 'traditional' marriage is only a few decades old because it was changed to recognize interracial couples.

You're not comfortable with it? - Fine, don't do it. Thongs on morbidly obese people give me the willies, but I'm not going to fight to prevent their right to wear them. 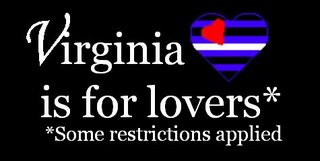 Marriage is for procreation? - Although it has been proven that unmarried individuals can produce offspring (and often do), someone tell the barren, sterile, infirm and geriatric they are forbidden to marry. Annul all pre-existing non-procreative marriages after a certain deadline, as well as those that continue to remain married after the last child has popped out.

It's not healthy for children? - Again, Oh, please. How can it be unhealthy for a child to be reared in the environment of a loving, committed relationship? If your answer is any of the above objections, then please reread them. If it's because of the absence of a father or mother figure, then please organize the release of children from all single parents.


Where do you stand on this? Have you given thought about why?
Posted by Just-Chuck at 9:21 AM

Well said! Very well said indeed. If sanctity means "sacredness," then we should firmly support any marriage between two people in love. That love is holy and sacred, and that's the criteria by which marriages should be sanctioned. Not by sanctimonious hypocrasy. And let's not hedge by labeling our marriages "civil unions." Let's consecrate real weddings for all lovers in the sanctuaries of our hearts. xox, Jay

Acceptance is hard to get, but as I look at it: Its their problem, not mine. I am not exactly normal(in a diff. way), but folks find out that over time.

The writing is great reading, and the points are valid. This is America, love the points.

I think government should get out of the marriage business altogether - despite my being gay, straight single people are also penalized and I think that is wrong, too.