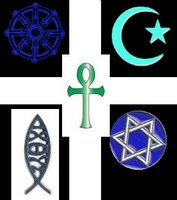 The nation's Roman Catholic bishops, meeting in Baltimore, declared [recently] that Catholics who minister to gays must firmly adhere to the church's teaching that same-sex attractions are "disordered." Catholics with "a homosexual inclination" should be encouraged to live in chastity and discouraged from making "general public announcements" about their sexual orientation, the bishops said. (Herald Sun)

The Baptist State Convention of North Carolina voted [recently] to cut ties with congregations that affirm or approve of homosexuality, formally adopting a rigid anti-gay policy that allows the group to investigate whether member churches are gay friendly. (Washington Post)

And recently in Pittsburgh, the Presbyterian Church (U.S.A.), a mainline Protestant denomination with about 3 million members, put a minister on trial for conducting a marriage ceremony for two women. (Herald Sun)


Here's a little test. Who is not going to hell? (A trick question.)


A) The new mother attending a church social dinner (shrimp and steak tar tar!) in the church sanctuary with her husband and month old daughter. The mother is sporting a mohawk, and a neck tattoo is just visible above the rabbit fur trimmed patchwork sweater that goes quite well with the artfully faded men's Levi's.

B) The kindly, hunched over, nearsighted virgin priest/pastor.

D) All or None of the above

I do not cotton to or subscribe to the Christian religion, so why does it bug the heck out of me when one of them believes that I and others like me are going to a hell of their making?

Their afterlife punishment for transgressions against their law should not bother me in the slightest.

I know, it shouldn't matter to me what they think. Yet still, I know that in their heart of hearts those people have judged me against their biblical standard and found me unrepentant and wanting. They may be nice, talk to me, even visit and offer presents, but in the back of their mind they're thinking, "You're going to hell." I doubt that many are pleased with that idea within themselves, but there it is.

They have judged and yet refuse to acknowledge judgement by the same measure. As they point out failure to adhere to Levitical strictures of the Old Testament, they themselves fail to abide by all the obsolete guidelines found in the same book. All or nothing people. You can't pick and choose.

This is not a discussion of old covenent vs. new covenent or the arbitrary distinction of moral/civil/ceremonial law. This is selective enforcement.

Just browsing Leviticus you'll find you can't eat rabbit or pork, or even touch the dead rabbit's fur or pig's skin. You can't eat lobster, shrimp or crab. Women can't wear men's clothes. Men can't wear women's clothes. You can't wear clothes woven of two different materials. You can't eat fat or rare steak. You can't go to church for a month if you gave birth to a boy -- two months if it's a girl. Slavery is fine. Priests can't have any defects, not even poor eyesight. Of course one must observe all the feasts, some sans yeast. Oh, and no tattoos or mohawks.


I recently sent a USA Today link to someone about religion and homosexuality. I said it was a great article. She said "I'm sure it is 'great' from your perspective. Please drop the subject." (I picture covered ears and a loud "LA LA LA LA LA LA.") Purposeful ignorance! They won't think logically or absorb any facts that are contrary to their application of biblical law. (The earth goes 'round the sun. HERETIC! ) They will not continue the discussion through to logical ends. They often close their ears or talk over you. Or get to the point where they "drop the subject," "agree to disagree,""hate the sin, love the sinner," or chalk it up to blind faith. (Translation, "No one can prove any of it, but we can still be friends until you go to hell.")

This invasive bigotry changes YOUR quality of life. If YOU don't speak up, and get justifiably angered, it will invade YOUR HOME even more than it does now. I can't get my marriage acknowledged in my state - because of religion. That may not effect you. Can you buy alcohol on Sundays? I can't buy alcohol in my county (at least it's not a dry county) until after 1 p.m. on Sundays. Why? I'm guessing because of an outdated religious-based statute. What other religion-based laws effect you?

As an opiate for the masses, or a coping mechanism - I think religion is fine. More in the way of philosophy and guidelines. (Be kind to others and all things in moderation, you know.) Religion and prayer in most usage is simply verbalized hope and a displacement of worry or anxiety--a tool, used to help people not to obsess about something over which they have no control. It is my opinion, that if they need to personify an energy or create a deity to which they hand these control issues, let them. It's got to be less stressful for them.

I understand but do not feel the need to personify or create a deity to explain anything, to justify my existance or to give me an ultimate goal or destination.

When Religion Loses its Credibility
Posted by Just-Chuck at 3:34 PM