How Many Shopping Days 'til Solstice? 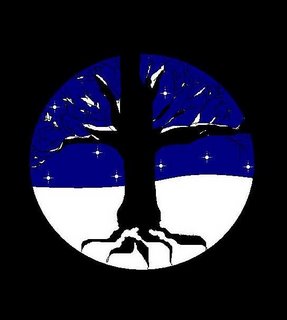 Okay, it has officially begun. I've started getting the cutesy e-mails from friends and relatives who push the Christ in Christmas. The same ones who send me the e-hugs and e-Jesus and e-prayers. (Egads.)

So, I've compiled the information below from various Internet pages and saved it so I could hit 'reply all' and push back.

It is not a CHRISTmas tree. It is a Yule tree. Say it with me, YULE tree. Get it right.

The Christmas tree is often explained as a christianization of the ancient pagan idea that the evergreen tree represents a celebration of the renewal of life. The exact origin of the Christmas tree seems under debate, but it is safe to say that this symbol evolved from Pagan tradition.

The Norse pagans and Celtic Druids revered evergreens as manifestations of deity because they did not "die" from year to year but stayed green and alive when other plants appeared dead and bare. The trees represented everlasting life and hope for the return of spring.

The first Christian use of the Christmas tree symbol is credited to 16th century when devout Christians also brought decorated trees into their homes. German born Prince Albert, husband of Queen Victoria, is credited with starting the trend in England in 1841 when he brought the first Christmas Tree to Windsor Castle.

Yule falls approximately on the Winter Solstice, the shortest day and longest night of the year. After Yule the period of daylight begins to wax, until it reaches the longest day on June 21, the Summer Solstice. For folks in Northern climes, the Winter Solstice was a most welcome day to anticipate at the dark end of the year, and although months of darkness lay ahead, folk could rest assured Sunna's might was on the increase and darkness was waning.

Yule is actually a span of thirteen days, usually counted from the night before the solstice (19 or 20 December, as it varies from year to year ), to the thirteenth night, (usually January 6 called "Twelfth Night" later by Christians). Bede called Yule eve "Mother Night", and it is thought this night was devoted to honouring the Idises (or Disir, female ancestral spirits) the family protectors. The Solstice itself, either 20, 21 or 22 December, is the most important of the days, when the dead and other beings of the dark fare most freely, Winter arrives, and humans are closest to the spirit worlds.

The druids decorated their trees with symbols of prosperity -- a fruitful harvest, coins for wealth and various charms such as those for love or fertility. Scandinavian Pagans are thought to be the first to bring their decorated trees indoors as this provided a warm and welcoming environment for the native fairy folk and tree elementals to join in the festivities. The Saxons, a Germanic pagan tribe, were the first to place lights on the their trees in the form of candles. Ancient Romans decorated their homes with greens at the Festival of Saturnalia, their New Year and exchanged evergreen branches with friends as a sign of good luck.

No matter what you choose to celebrate, a birthday or the increase of daylight, fertility or the miracle of light, Yuletide is a time of peace, renewal, thanksgiving and remembrance. Be sure to tell your family, friends, and friends who are family how much they mean to you.
Posted by Just-Chuck at 9:50 AM